Yoga began as a movement all about enlightenment, but now it’s a competition. When the yoga mat goes flat, it’s time to get attention. Don’t worry about people trying to relax on a Friday after work. They are going to be stunned by how enlightened everyone is who has read this article. Now crack a White Claw, and enter the standing tree pose.

Nothing says a person is enlightened like super loud breath. The teacher will even probably say at one point that people should take a deep breath in and then release. Blow it out like the wolf in the three little piggies. Be the wolf… The whole time. If someone passes out, bonus points. Thats what enlightened gods do. 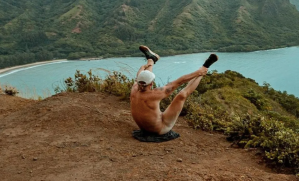 3) Fart In a really awkward pose

Nothing says enlightenment like enlightening the room with a little fart. Its possibly the most classic way to toot your own horn, and people will think the fart just means the yogi is comfortable with themselves. Dont tell people, it was really just that Taco Bell was a bad choice before evening yoga practice. Chataranga.

4) Say Namaste louder than everyone else

People are fake news these days, so let them know Namaste. Let them know it loud! Its also a foreign language, so thats bonus points for being cultured. If the word Namascar comes out, people just might think there was a trip to Rishikesh in India (BTW no liquor in Rishikesh which is kind of a bummer but namascar).

5) Talk about the Yoga Buzz at the end

In life, its essential to follow through. Talking about the yoga buzz is one of the key ways to let people know that this is the drug. Saying, “Yoga is my drug.” creates additional bonus points towards enlightenment because people will associate it with fun drug addicts they know outside of yoga class.  Don’t tell people that its kale salad in the week, and cocaine in the weekend. If anyone asks too many questions, just breathe loudly and fart.

So now that yoga has been made cool again, its time to take the techniques into public. Stretching the neck muscles really dramatically on public transport is also a great idea. Don’t be afraid to fart and breathe loudly in public outside of the classroom. If you can do that, please take a video and upload it. We’d love to see it.

Just a guy who loves being sarcastic in Boulder. View all posts by BS